Today, we begin a new phase of our analysis of the Illinois Supreme Court’s recent history, as we turn our attention to the work of the individual Justices. Over the next two months, we’ll be assessing how influential individual Justices appear to be in swaying the Court to their point of view. First up: have any of the Justices tended to write more of the Court’s majority opinions than others? Nearly all appellate courts try to equalize the workload among the Justices, so the “default” value would be that each sitting Justice writes one-seventh of the total majority opinions. But of course, one has to actually be in the majority to be assigned the majority opinion.

In Table 356 below, we report the total number of majority opinions written by each Justice in civil cases decided with dissent between 2000 and 2004. One might expect a Justice very much in the mainstream of the Court’s thought to frequently vote with the majority in non-unanimous decisions, and therefore frequently find himself or herself writing the majority opinion. 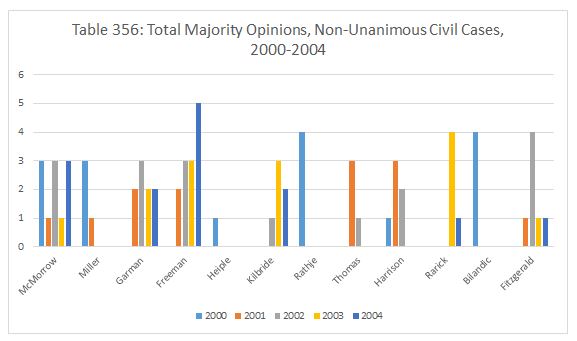 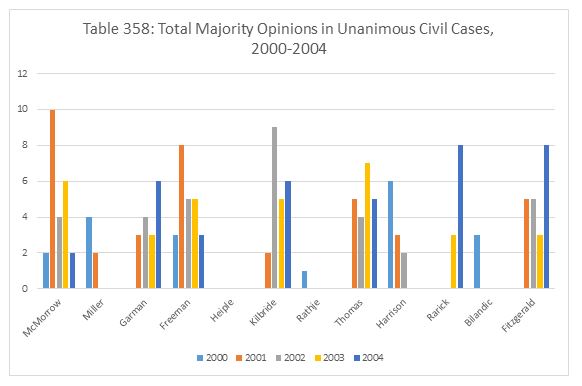 In 2002, Justice Kilbride wrote 27.27% of the unanimous civil majorities. Justices Fitzgerald and Freeman wrote 15.15%, and Chief Justice McMorrow and Justices Garman and Thomas wrote 12.12% of the cases each. The next year, the caseload was somewhat more evenly distributed, as Justice Thomas wrote 21.88% of the cases, Chief Justice McMorrow 18.75% and Justices Freeman and Kilbride 15.63% apiece. Finally, in 2004, Justices Rarick and Fitzgerald were responsible for 21.05% of the unanimous civil majorities apiece. Justices Garman and Kilbride wrote 15.79% each, and Justice Thomas added another 13.16%. Join us back here tomorrow as we turn our attention to the majority opinions in criminal cases between 2000 and 2004.